“Forced registration – Not with us!” Sex workers and allies demonstrate against the ProstSchG in front of the Federal Ministry for Family Affairs in Berlin © 2015 Emy Fem 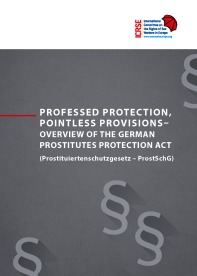 As noted therein, ICRSE has serious concerns about the ways the “Prostitutes Protection Act” will significantly undermine many of sex workers’ fundamental rights. The mandatory registration of sex workers and the possibility of issuing administrative orders against them limit their right to freedom of vocational choice, and the extensive means of surveillance that the “Prostitutes Protection Act” affords the authorities infringes the constitutional right of the inviolability of the home. The recording of personal data in connection with information about persons’ sexual life is a particularly serious issue as it violates the fundamental right to informational self-determination and the directive of the European Parliament on “the protection of individuals with regard to the processing of personal data”. Given the impossibility of providing absolute data protection, the upcoming collection of this personal information is highly problematic.

The “Prostitutes Protection Act”, in the form that it will come into effect on July 1, 2017, only pretends to be a law for the protection of sex workers. The regulations provided therein fail to support both sex workers and trafficked persons. Instead, the law will force sex workers into illegality, especially those working together at apartments as well as migrant, trans, and otherwise particularly vulnerable individuals in sex work. What is labelled as protection is in large parts simply a law aimed at repressing sex work.

We invite sex workers and policy makers to read the briefing paper and take note of the recommendations from the sex workers’ community. 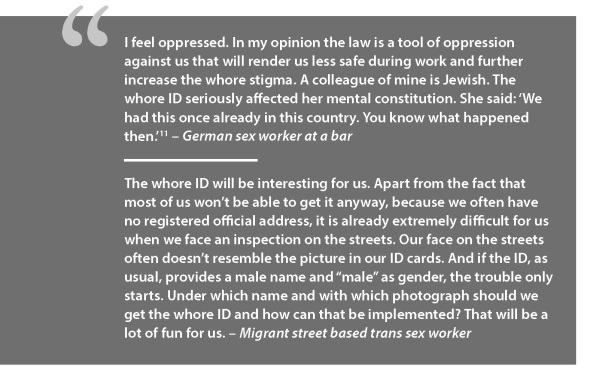 This article was first published as “Sex Workers’ Rights Day: ICRSE launches Briefing Paper on Germany’s new ‘Prostitutes Protection Act’” on the website of the International Committee on the Rights of Sex Workers in Europe (ICRSE) on May 31st, 2017. Republished with kind permission.