Interview with Sonia, an Italian migrant sex worker in Germany 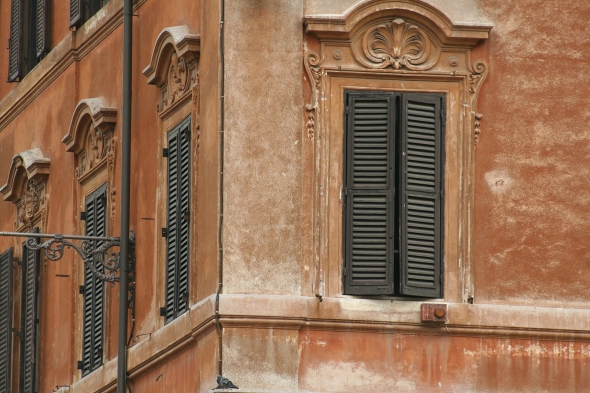 Before 1958, Italian law once stipulated that shutters of brothels had to
remain closed at all times, hence the name “case chiuse” or “closed houses”.

Clicca qui per la versione italiana di “Intervista a Sonia, sex worker in Germania”. Please note that the copyright for this article lies with Abbatto i Muri, where this interview was first published, and is not licensed under a Creative Commons License.

Sonia is 33 years old and lives in Germany. She has been a sex worker for six years and she tells us – via Skype – what she thinks about the abolitionist trend that currently pushes Europe towards criminalising sex workers’ clients and further marginalising sex workers.

Sonia, first of all, how and why did you start sex work? Did you do it by choice or were you forced to do it?

I arrived here after trying to find work using my degree. I was unemployed, doing precarious jobs, like many others. Then I moved abroad and decided to work to be economically independent. I had different jobs but I could not quite make ends meet. I began to work as a prostitute by choice. For me, it’s a job like any other, and I can earn more money. I met a woman who did this and she gave me some tips. I was never forced to do anything.

Do you mind talking about your clients? Are they violent? How do you feel when you sell sexual services?

Violent? (laughs) Where I work the violent ones are kicked out on their asses. The good part of working without having to hide is precisely that. You can work at a place with better safeguards and you can count on others’ solidarity. How do I feel? Good. It’s my job. I often have fun. Sometimes I get bored, and only a few times I felt annoyed, and with those clients I haven’t worked anymore.

Are there also men or trans* people in your work environment?

Yes, of course. There is less demand for men, but trans* people are doing fine.

Do you plan on doing this job forever?

Forever? (laughs) Nothing is forever. I can stop working tomorrow or twenty years from now. It depends. Do you know if you are going to do what you are doing now for the rest of your life?

Ok, let’s move on from these stupid questions, because I wanted to ask you about traumata and things like those but it looks like you have other things to talk about.

Oh, please. If you want me to play the part of a martyr, you have to pay me at least (laughs).

Why did you go to Germany to work as a sex worker?

Because it’s not possible in Italy. Until they regulate the profession, many Italians are going to move to Switzerland, Germany, or the Netherlands. It is too difficult in Italy. Escorts and those who work at apartments can manage to live well, but the law is aimed at making you rot on the streets, exploited by pimps.

Do you think regulation would improve your colleagues’ lives?

Of course. Think about the foreigners who will get a residency permit with a work contract. If they erased the criminal offence of abetting [prostitution], you are no longer going to rent an apartment in secret at very high costs. You could pay taxes. You could do everything in plain sight. You would no longer need a pimp to be ‘protected’ because if you work in a protected environment with your colleagues, violent clients cannot harm you. 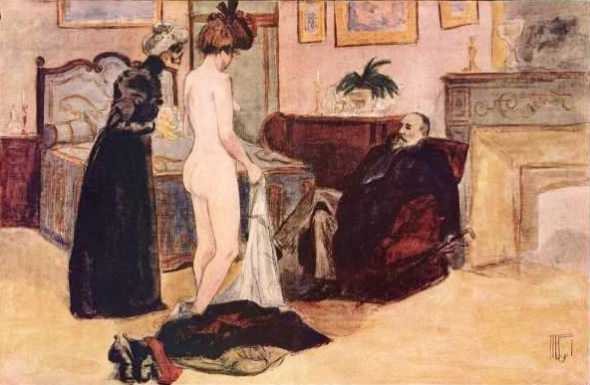 “Vous plaît-elle?” (Do you like her?)
Painting by French painter Hermann Vogel

What do you think about the abolitionist wind from northern Europe that is influencing Italy too?

First, Italy had state-regulated brothels – the worst – and after that, the law has always been abolitionist. The Merlin Law* is abolitionist as well. In northern Europe, we have SWERFs [sex worker-exclusionary radical feminists] that are fighting a war. We are back in the puritan era. Sweden, which is a racist country with a lot of Nazi roots, is affecting other nations’ policies towards a morality that is misogynous, patriarchal, and sexophobe. In the Netherlands, they are talking about closing the windows. In Germany, they are discussing a law to register us and inspect us with a magnifying glass to see if we are infected. They’re not interested in our working conditions. What matters to them is protecting society from us whores.

In Italy, they say that regulation is useless because the German model, demanded by sex workers, has failed. Is that true?

Bullshit. In Germany, where regulation exists and where locals and prostitutes stick with it, it works. The fact is that most places in Germany did not apply the law because puritans have boycotted it. The philosophy of some authorities is one where they sleep better knowing there are whores on the streets in the hands of pimps, so that they can tell the tales of victims of exploitation, which is so useful to create statistics for organisations fighting human trafficking.

Are you saying that human trafficking or exploitation do not exist?

Not at all. I’m saying that in some places there certainly are exploitative conditions. Do all companies in Italy comply with the law? Isn’t there anyone taking bribes or failing to pay their contributions? Here it’s the same. Some do not pay taxes and do not follow the rules. Then there are women on the streets, and given that regulation has been boycotted in many places in Germany, they remain in the hands of pimps.

How do you think the problem of exploitation can be solved?

Through regulations. Enabling women to come out of the hiding. Even more so, if they come from abroad and are threatened by laws that want to push them back to their home countries unless they have jobs.

Are you aware that abolitionists deliberately conflate human trafficking with sex work? What do you think about that?

I think that’s terrible. What some of them write on Twitter or Facebook is repulsive. They are fanatics who are full of spite and don’t allow us to speak about what we do for a living. There are really few feminists like you who let us speak. Human trafficking is a problem we want to address. But that has nothing to do with those who, like me, chose this job. Anyone saying they are the same thing is telling lies.

Why do you think they’re doing that?

Don’t you think it’s obvious? Because they do not care about the fact that I want to be a prostitute and that I am not exploited by anyone. Prostitution is violence, they say, and all clients are rapists. They are so busy saving us that they have forgotten to ask what we think about that and what means we want to use to save ourselves.

What would you like to say to these women?

First, I’d say that I’m sorry they are ignoring what I think. I’m sorry that they are playing us off against one another, those prostitutes who do it by choice and those who are being exploited, as if I was denying their suffering. It’s a cruel and violent game, because I feel that any prostitute who is a victim of exploitation is like a sister of mine. I would like to talk with her, and not with those who exploit her to enforce an opinion that has nothing to do with us.

Have you ever known an exploited prostitute?

Of course. Do you think that if I saw one I would turn my back on her? I hosted many in my house, especially foreigners, who were persecuted by police due to the immigration laws. Instead of protecting them, they wanted to send them back like parcels in human skin with an expiry date on them. I have known many, I understand them, and many have told me that they need a contract to stay and to get rid of their pimps. If Germany or Sweden or other countries do not want to regulate [sex work], do you really think they worry about saving women? In my view, those who “worry” the most are the racist ones. Do you know how many women could get a residence permit if prostitution wasn’t criminalized? As a matter of fact, racists are the ones who push for abolitionism and Nazi-style registration of prostitutes. There’s not going to be a happy ending for those who don’t belong to the race they like.

As a matter of fact, in Italy, so-called trafficking victims sometimes end up at one of the Centres for Identification and Deportation (Centro di identificazione ed espulsione, CIE).

Sonia, what else would you like to tell me? Something that comes to your mind and you want the little world that reads this blog to know?

A hug to the sisters and colleagues who work in Italy and have to endure a lot of difficulties. Fight for me as well, and if you manage to achieve something, who knows, I might come back to Italy soon.

In Italy, “indoor sex work is prohibited though in practice, private apartments with only one sex worker are ‘tolerated’. The state seeks to prohibit or drastically re duce street prostitution. Soliciting is subject to a fine and is defined by law as ‘unabashedly inviting clients on the street’. It does not, however, prohibit loitering whilst awaiting clients on the street. The Domestic Security package of June 2008 invests mayors with the judicial power to declare anything that might endanger the security and decorum of the cities an emergency. For this reason, sex workers and their clients have been subject to special ordinances that allow municipal police to administer fines. In addition, the Public Security Law enables the local chief constable to impose and enforce a mandatory expulsion of persons from a city in which they do not officially reside. Currently, EU citizens who violate this ordinance are fined, while non-EU citizens, especially from African countries, are put in temporary detention/identification centres and, in accordance with the laws on immigration, are subsequently deported. … Migrants who hold a regular work or residence permit may engage in sex work. However, it is not a rare occurrence that the police revoke residence permits and begin deportation procedures for persons working in sex work.”

Translation by Michela Cicco. Edited by Michela, Giulia and Matthias Lehmann. I would like to thank Eretica Whitebread for her permission to re-blog this interview and Michela and Giulia for translating and co-editing the English version. 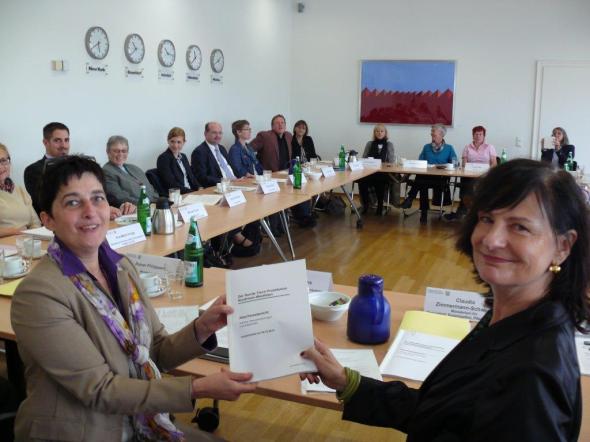 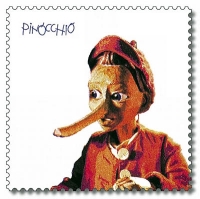